This post describes how to install Ruby on Rails on a MacBook Pro.

It’s nice that 2021 MacBook Pros come with the Ruby programming language installed by default. That’s great! There is a problem though because the Ruby version installed by default is 2.6.8, which is just shy of what we need to write a Ruby on Rails v7.0.3.1 application. 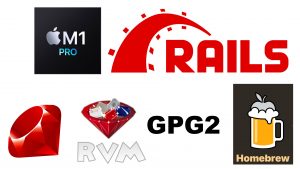 To fix this problem, we need to install a more recent version of Ruby on Rails. At the time of writing this, the most recent stable version was Ruby 3.1.0. To do that, I propose that we install a version management software called Ruby Version Manager (RVM – On Github).

In order to install RVM, they say you need to install GPG keys. So I copy the gpg command over to the terminal and we learn that we don’t have the command installed on the new MacBook. Ok, so now we need to find out how to install gpg onto our machine.

To install gpg, I’m going to use a popular package managing software called Homebrew (https://brew.sh/). I followed the Homebrew installation documentation and it worked as it was supposed to.

When you’re struggling with installing software on the command line, don’t forget to try closing your terminal and reopening it.

Finally, we create a new Ruby on Rails application on the Desktop folder of our application.

Commands Used for Ruby on Rails Installation on Macbook: 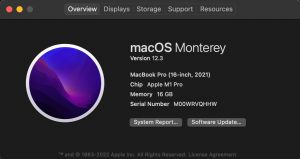 An app which inspires people to develop good habits by challenging their friends to contests.

An app which diplays API work that I've done, largely based around fullfilling the FreeCodeCamp.org curiculum projects.

A webapp with tools for producing and listening to podcasts more efficiently than standard podcast players.

The Art of War Mobile-Responsive

A random quote machine from Sun Tzu with custom illustrations.

Displaying the words of Odin in a mobile responsive format.

A fun little soundboard for one of the coolest characters in the history of movies.

A algorithm for developing large sets of fixture data which can be used to populate a Ruby on Rails application.

This is my code workshop. If you want to see a bunch of projects and a history of code adoration, this is a place to start.

Check out my beginers course for learning JavaScript from the ground up.
Udemy Course